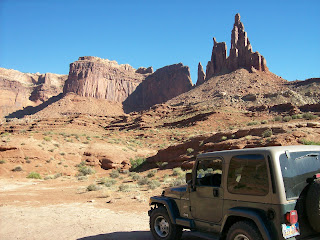 In May 2010 I had the opportunity to explore the White Rim Trail in Canyonlands National Park. We had applied for a permit the year before so my son could take some friends and bike the approximately 100 mile loop.
Unfortunately, he got a job out-of-state that spring and had to cancel his trip. Fortunately, I didn't have to cancel and decided to do the trip anyway in my Jeep. Normally I would not recommend a backcountry desert trip but I knew the White Rim Trail is usually well traveled in the spring. In fact, the Spring or Fall are ideal times to explore most areas of Canyonlands National Park and surrounding BLM lands.
The following is the journal I kept while on the White Rim Trail, as well as pictures I took on that trip. 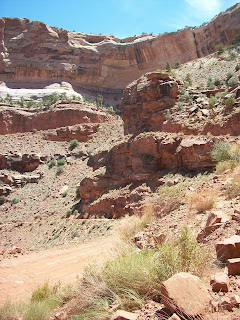 After checking in at the Island in the Sky Visitor’s Center I drove down the Shafer Trail from the rim. The Shafer Trail isn’t as wide as thought it would be and found it to be a little “hairier” than expected. It also felt like something was loose underneath in the suspension or frame, but I couldn’t find anything when I stopped about half way down. 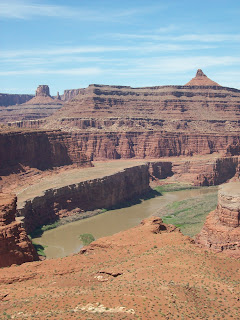 Did a side hike out to an overlook of the Colorado River and a nice view up to Dead Horse Point. Also stopped to take a look at Musselman Arch. 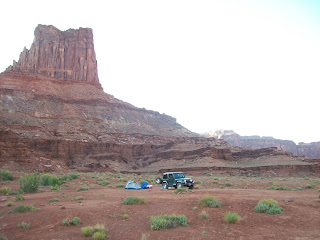 Camped at Airport D. Airport C and D have a nice access to a rim overlook down into Lathrop Canyon, but cannot see the river. You can look back to the west and see Washer Woman Arch.
To the south you can see the Blue Mountains, but not the Needles area. To the east you can see the La Sals inbetween some of the buttes.
It’s probably between 70-80 degrees with light winds. There are some gnats flying around that have been doing a little biting. Lots of mountain bikers and support vehicles, but a good distance between each campsite at Airport. There is room for up to 8 people at least and plenty of room for a kitchen area. No fires allowed, but can do dutch oven in a firepan and carry out the ashes.
Shade around 7pm and the gnats are getting bad and biting more. I looked under the Jeep again and found that the front sway bar linkage on both sides broke loose at the ball joints. It shouldn’t affect the handling on the dirt roads, but I’m not sure what that will mean for highway driving.
Day 2: Friday, May 21, 2010 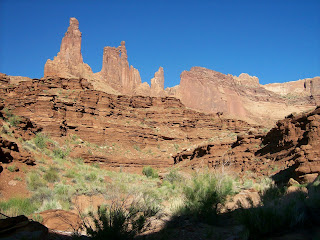 Up at 6am, cool and comfortable. The sun came up at 7am in camp. On the road by 8am I think. I hiked up the canyon on the east side of Washer Woman Arch, nice and shady. I also hiked up the canyon on the west side of Washer Woman, more open but better morning light on the arch. This makes for a nice side hike. I can see Mesa Arch up on the rim.
Gooseberry  Camp B is the better of the two camps for future reference. Camp A is right by the road.
The view is spectacular when you come around the point below the White Rim Overlook. You can see the Needles in the distance to the south with Monument Basin in front. 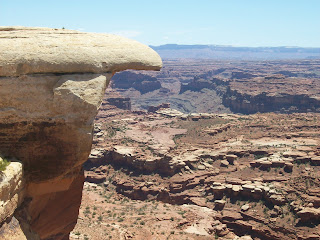 White Crack Camp is 1.4 miles from the junction with the main trail. There is a short hike out to a peninsula that has a spectacular view of Lockhart Basin, La Sals, Six Shooter Peaks, the Needles, Doll House, etc…an excellent panoramic view.
Coming around the Green River side of the trail, I came to a spot where it was convenient but not necessary to drop into low range. At some point the Jeep slipped out of low range into neutral so I had to roll backwards a bit to get it back in to low range and continue.
Just as I was coming up the Murphy Hogback there was a loud gushing noise and green liquid was all over the inside of the engine compartment. At first I thought I blew a radiator hose but remembered the radiator liquid in this jeep is red, not green. I eventually found an air conditioning tube had come loose from the firewall and it clipped right back in. I put some duct tape around it all just in case. 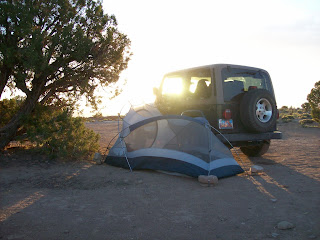 Murphy Hogback is a steep one-lane track up to the top of the level above the White Rim. It’s very steep and narrow and I was concerned about slipping out of low range again going up, but the Jeep did fine. The camp was right after reaching the top of the climb, Murphy Camp A. The camp is large with plenty of room and excellent views. It’s somewhat exposed and it was getting windy. I’m sitting with a Juniper Tree blocking the wind right now and parked the Jeep to also provide some protection from the wind.
Since experiencing two mechanical problems with the Jeep, I’m seriously considering driving all the way out tomorrow to Moab instead of staying at Potato Bottom so I can work on the sway bar linkage. 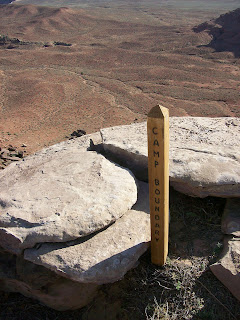 It’s gotten really windy in the late afternoon/early evening. Dust devils and no consistent direction to which way the wind would blow. Walked out to the point where you can look south to the Needles and north to see the Green River and the Turks Head. Packed up the kitchen after heating up some soup because it has gotten really windy and I’m thinking I’d better get an early start in the morning. Could barely set up the tent it was so windy.
Day 3: Saturday, May 22, 2010
I didn’t sleep well at all. I put up the rain fly that comes all the way to the ground to keep the blowing sand and dust out. But every big gust blew sand in anyway right on top of my head and my pillow. I had to brush the sand off my pillow periodically throughout the night. At 10:30pm I finally put earplugs in my ears and slept some. I woke up at 6am very tired and it’s still very windy. 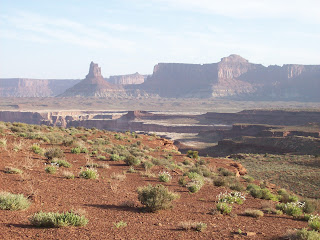 Still concerned about the mechanical failures of the Jeep, not sure if the a/c problem will affect the engine temperature so I’ll try and conserve my water supply and get going early and see if I can get all the way out to Moab today while parts stores are still open.
A lot of up and down from Murphy to Candlestick. The drop off of Murphy heading north is also steep, but not as intense. I’m not a fan of driving near exposed cliffs so it’s probably not nearly as intense as I imagine it to be.
Candlestick is exposed but has a nice view down to the Green River. Low range is holding and the Jeep is not overheating, but the brakes feel a little weak. Just another thing to be concerned about. 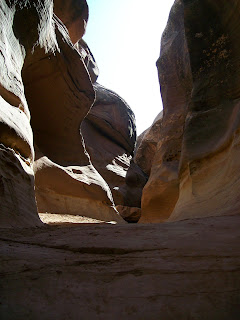 Stopped at Wilhite Canyon. A nice slot canyon that starts just on the west side of the road. I hiked down about 5 or 6 bends but decided it not a very good idea to go very far alone. It could make a nice side hike in the future.
Before Potato Bottom the road parallels the river up on the White Rim, but not too high up. The wind was blowing so hard it looked like the current was going upstream. Potato A is small, but could still fit 8 campers, Potato B is the best of the 3, and Potato C is nice but a ways from the outhouse. 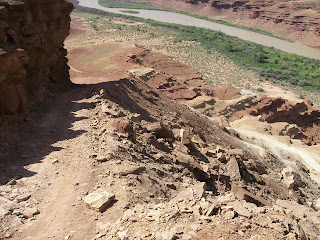 Hardscrabble was just as gnarly or “gnarlier” that Murphy Hogback in my opinion. It’s still extremely windy and still not letting up when I got to the Fort Bottom trailhead. I decided not to hike out to the Fort Bottom ruin as it was so windy I wasn’t sure I’d be able to stay on the trail. A bike support truck came by right at the trailhead which was nice because I didn’t notice very many places we could have squeezed by each other in that whole section up Hardscrabble and back down off the level above the White Rim.
Pretty steep decent down to Hardscrabble Camps. The camp furthest from the road looked like the better of the two.
There is a lot of deep sand at the Upheaval Dome trailhead. Also, big washes with sand and erosion.
Taylor Canyon looks like an interesting side trip. It’s about 6 miles to the Moses and Zeus formations. Didn’t go due to my concern about vehicle issues. 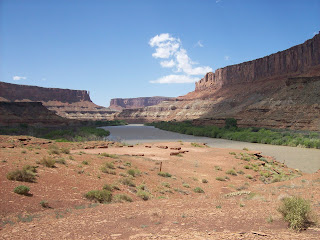 :Labrynth camps are open and exposed with no shade for either. But they are in a beautiful area fairly close to the river and opening up to the east towards the Island in the Sky Rim. 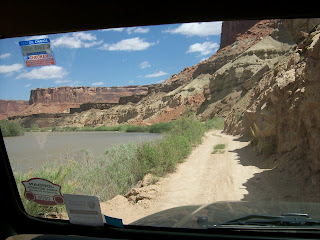 The road parallels the river for quite a while. In some places I would suspect if the river were able to flood like it used to during the pre-dam era, the road is probably low enough to wash out during flood season.
I didn’t go down to the Mineral Bottom boat ramp, but looked at it from the road. Lots of canoeists will take out or put in there for a great float trip. 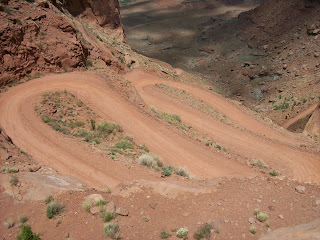 The Mineral Bottom road up from the river bottom to the rim was just as steep as anything else I’d been on. The Shafer Trail was wider and more gradual. I had enough steep narrow climbs so I didn’t enjoy this one either.
After reaching the top, the road was wide and much better. I headed straight back to Moab and the wind was still gusting heavily. 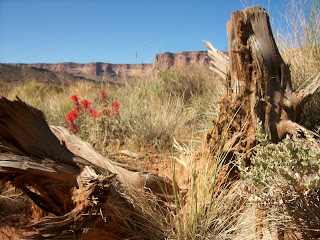 I found I broke the stabilizers that keep the Jeep from swaying side to side. I spent $116.00 on parts and tried to uninstall the broken ones, but couldn’t get them to come off. I decided since they are not necessary to the front suspension that I could just take some rope and lash them together to get home. 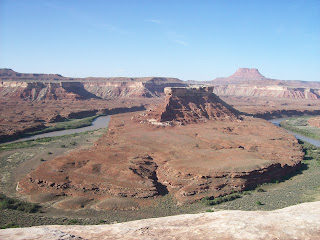 It was still very windy all the way home, but got home without any further incident.


(c) DTE Consulting 2012 "Helping You Do The Extraordinary!"
Posted by Chris LeCheminant at 4:21 PM No comments: 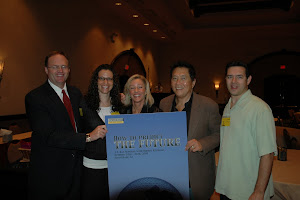 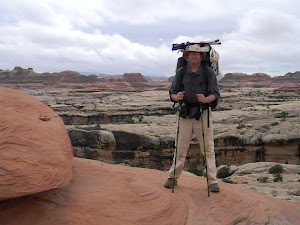 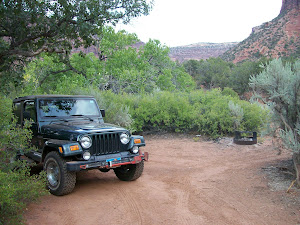 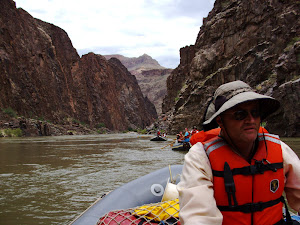